Piedmont Lithium Limited (“Piedmont” or “Company”) is pleased to announce a new exploration target, the Sunnyside property, within the historic Carolina Tin Spodumene Belt (“TSB“) in North Carolina.  The Sunnyside property hosts a high grade spodumene showing located immediately south of the historic Hallman Beam Mine, which was operated for 43 years by FMC Corporation and is less than 5 miles from Piedmont’s core property. 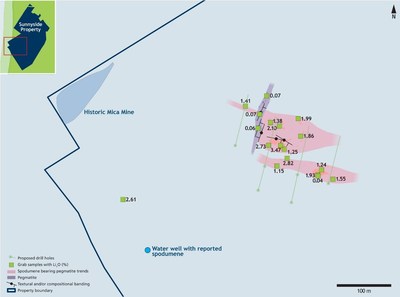 Two large surface exposures of spodumene-bearing pegmatite have been identified by initial sampling and mapping and will be the main target of initial drilling on the Sunnyside property which will begin shortly as resource definition drilling is nearing completion at the core property.

Keith D. Phillips, President and Chief Executive Officer, said, “We are excited about the prospectivity of our new property and the naming is intended to highlight the potential significance of the Sunnyside area to the broader Piedmont Lithium Project.  A successful drill campaign is nearing completion on the core property and a maiden Resource is expected by the end of June.  We will then turn our attention to Sunnyside, where we are hopeful that mine-life and/or throughput additions will have a materially positive impact on the economics of the integrated project.”

The Sunnyside property consists of approximately 255 contiguous acres and hosts significant occurrences of spodumene bearing pegmatite.  Initial interpretations recognize two bodies that generally trend to the west northwest which is subparallel to the trend of the historic Hallman Beam deposit.  Surface exposures of outcrop/sub crop/float range from 60 meters by 150 meters for the northern body and from 25 meters by 150 meters for the southern body. A barren pegmatite is mapped trending north northeast.

Select grab samples from the spodumene bearing pegmatite have yielded high grade values including 3.47%, 2,82%, 2.10% and 1.99%Li2O with further results in Appendix 1.  The mineralization is hosted in fine to coarse grained pegmatite.  Coarse grained varieties commonly contain spodumene crystals greater than 10 cm in length.  Locally, textural and/or compositional banding is observed which consistently dips moderately to the south.

Approximately 280 meters southwest of the main occurrence, several float blocks were sampled and returned 2.61% Li2O.  Also, to the southwest, the property owner reported spodumene in cuttings from a drilled water well.  An historic mica mine occurs due west of the main occurrence, where mine dump material includes coarse grained pegmatite with muscovite sheets/books greater than 10 cm in diameter.

The Company is highly encouraged by these initial results and considers the Sunnyside exposures as a high priority drill target.  Initial drilling is scheduled for the upcoming weeks and is expected to consist of 4-6 diamond drill holes totalling 600-1000 meters.  Data will be collected from oriented drill core which will aid in the structure interpretation of the spodumene pegmatites.