-Piedmont increases land position at its Piedmont Lithium Project by 20% to a total of 1,092 acres
-Agreement to purchase 188 acres within the Carolina Tin-Spodumene Belt, the historic home of world lithium production from the 1950s to the 1990s
-Builds a contiguous 245-acre tract due south of FMC’s past-producing Hallman-Beam mine
-Piedmont plans to accelerate its land consolidation strategy throughout 2018

NEW YORK, Jan. 31, 2018 /PRNewswire/ — Piedmont Lithium Limited (“Piedmont” or “Company”) is pleased to advise that the Company has increased its lithium mineral rights by 188 acres through a strategic land acquisition agreement signed with local landowners in the Carolina Tin-Spodumene Belt (“TSB“) in North Carolina, United States.  The new acreage adjoins a 57-acre parcel already under option by Piedmont, creating a large 245-acre contiguous land package in close proximity to the past-producing Hallman-Beam mine and within four miles of the Company’s current Phase 3 drilling program. 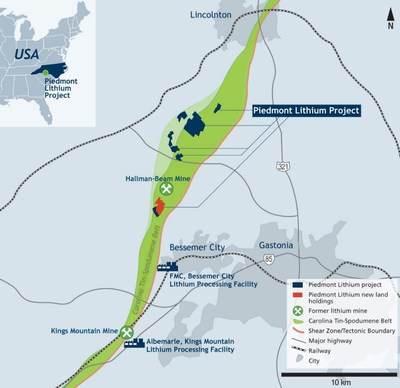 During initial prospecting, areas of multiple spodumene bearing float blocks were identified on the new property, and grab samples have been collected and submitted to the lab for analysis.  Prospecting and soil sampling will commence in the near future in order to identify high priority drill targets.

The Piedmont Lithium Project now encompasses approximately 1,092 acres within the TSB, representing a 20.7% increase in the Company’s land holding as previously announced to the Australian Securities Exchange (“ASX”). Piedmont’s strategy is to consolidate land in the region between its newly optioned and historical landholdings in order to support the large and long-lived integrated lithium project the Company intends to develop.

Keith D. Phillips, President and Chief Executive Officer, said, “This land acquisition is highly-strategic because the property is located on-trend and immediately south of the historic Hallman-Beam mine, one of the world’s largest sources of lithium from the 1950s to the 1990s.  In combination with 57 adjacent acres we already control, we now have a 245-acre package which could serve as a second core mining area for the Company, possibly enabling us to significantly increase the size of our lithium project. Our geologists are excited about the prospects on the new land and will be designing a drill program in the near future.”

Piedmont Lithium Limited (ASX: PLL; OTC-Nasdaq: PLLLY) holds a 100% interest in the Piedmont Lithium Project (“Project”) located within the world-class Carolina Tin-Spodumene Belt (“TSB”) and along trend to the Hallman Beam and Kings Mountain mines, historically providing most of the western world’s lithium between the 1950s and the 1990s.  The TSB has been described as one of the largest lithium provinces in the world and is located approximately 25 miles west of Charlotte, North Carolina.  It is a premier location to be developing and integrated lithium business based on its favourable geology, proven metallurgy and easy access to infrastructure, power, R&D centres for lithium and battery storage, major high-tech population centres and downstream lithium processing facilities.

The Project was originally explored by Lithium Corporation of America which eventually was acquired by FMC Corporation (“FMC”). FMC and Albemarle Corporation (“Albemarle“) both historically mined the lithium bearing spodumene pegmatites within the TSB and developed and continue to operate the two world-class lithium processing facilities in the region which were the first modern spodumene processing facilities in the western world. The Company is in a unique position to leverage its position as a first mover in restarting exploration in this historic lithium producing region with the aim of developing a strategic, U.S. domestic source of lithium to supply the increasing electric vehicle and battery storage markets.

Piedmont, through its 100% owned U.S. subsidiary, Piedmont Lithium Inc., has entered into exclusive option agreements and land acquisition agreements with local landowners, which upon exercise, allow the Company to purchase (or in some cases long-term lease) approximately 1,092 acres of surface property and the associated mineral rights.

The information in this announcement that relates to Exploration Results is based on, and fairly represents, information compiled or reviewed by Mr. Lamont Leatherman, a Competent Person who is a Registered Member of the ‘Society for Mining, Metallurgy and Exploration’, a ‘Recognized Professional Organization’ (RPO). Mr. Leatherman is a consultant to the Company. Mr. Leatherman has sufficient experience that is relevant to the style of mineralization and type of deposit under consideration and to the activity being undertaken to qualify as a Competent Person as defined in the 2012 Edition of the ‘Australasian Code for Reporting of Exploration Results, Mineral Resources and Ore Reserves’. Mr. Leatherman consents to the inclusion in the report of the matters based on his information in the form and context in which it appears. 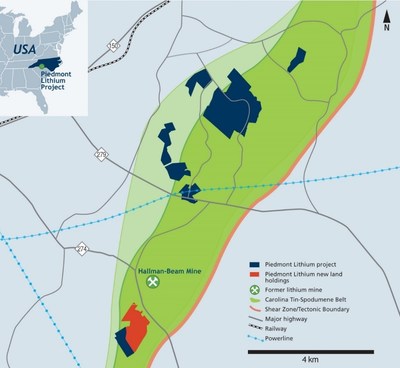