Piedmont Lithium Limited (“Piedmont” or “Company”) is pleased to announce that the Company has secured an additional 107 acres of within the historic and world-class Carolina Tin-Spodumene Belt (“TSB”). This increases the Company’s total land holdings to 1,199 acres and, more importantly, consolidates a further 137-acre land position just south of the Company’s core land package where five rigs are currently drilling.

Piedmont continues to make significant progress on its 20,000-meter drilling campaign, with the first 13,000 meters committed to infill drilling to define the maiden Mineral Resource estimate. On completion of the infill drilling the management team expects to move one or more of the five rigs to the newly acquired properties to test the high priority drill targets. The Company will make an announcement on the progress of the current drilling campaign and future drill targets over the course of this quarter.

Keith D. Phillips, President and Chief Executive Officer, said, “The addition of a third large contiguous land block is highly strategic, particularly given the new property’s location on-trend and midway between our current core land package and the historic Hallman-Beam mine, one of the world’s largest sources of lithium from the 1950s to the 1990s.  Our geologists are excited about the prospects on the new land, and we are optimistic that our strategy of TSB land consolidation will position us to develop a large, long-lived integrated lithium project.”

The Company expects to continue to add to its land position in the TSB during the course of 2018 with management in discussions with multiple land owners in the region to secure additional mineralised land holdings. 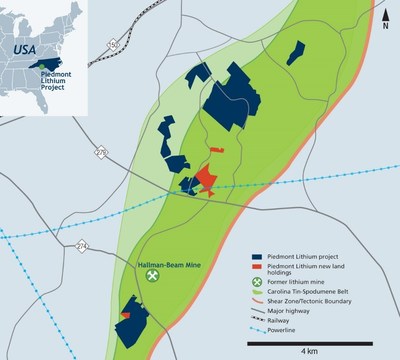 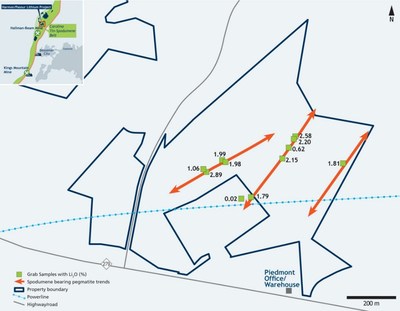 The largest property added is located approximately 1 mile south-southeast of the core land package.  This property is contiguous to a pre-existing Piedmont land holding and consolidates this area into a 137-acre position which appears to host high-grade multi zoned mineralization.

Eleven grab samples have been collected from the numerous sub-crop and float blocks on the property with nine of the samples returning high-grade lithium, with the most impressive results including 2.89% Li2O, 2.58% Li2O, and 2.20% Li2O (refer to Appendix 1 for further details).

Initial interpretations suggest at least three individual northeast trending zones of mineralization.  One zone is traceable for over 200 meters along strike. The spodumene occurs in fine to coarse grained pegmatite, locally spodumene crystals are in excess of 10 cm in length.