– Piedmont has further increased its land position at the Project by 26% to a total of 903 acres
– First mover land position within the historic Tin-Spodumene Belt in North Carolina, United States
– Final assay results from Phase 2 drilling campaign due in the coming weeks 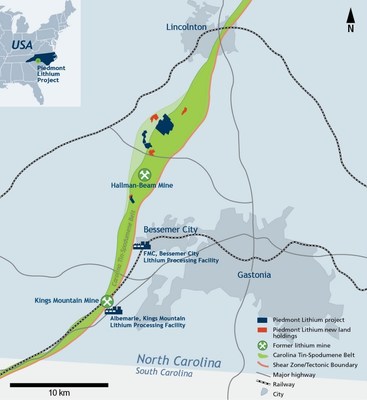 The Piedmont Lithium Project (“Project“) now encompasses approximately 903 acres within the TSB, representing a 118% increase in the Company’s initial land holding as announced to the Australian Securities Exchange (“ASX“) on 27 September 2016. Piedmont’s strategy is to consolidate the region between the newly optioned and historical landholdings, with all additional landholdings highly prospective for spodumene bearing pegmatite.

During initial prospecting, an area of multiple spodumene bearing float blocks was identified on one of the new properties.  The blocks range up to 1 meter in scale.  Grab samples have been collected and submitted to the lab for analysis.  Prospecting and soil sampling are planned for all of the new properties in order to identify high priority drill targets.

Piedmont, through its 100% owned U.S. subsidiary, Piedmont Lithium Inc., has entered into exclusive option agreements and land acquisition agreements with local landowners, which upon exercise, allow the Company to purchase (or in some cases long-term lease) approximately 903 acres of surface property and the associated mineral rights. The new properties optioned have been secured on substantially the same terms as the Company’s existing option agreements.

Keith D. Phillips, President and Chief Executive Officer, said, “These strategic land acquisitions are on-trend and should enable us to grow mineral resources over time, ultimately leading to greater throughput and a longer mine life. These latest agreements increase our land holdings in the prolific Carolina Tin-Spodumene Belt by over 26%, and we are in conversations with many other landowners to further consolidate our position in the region.”

Piedmont is also pleased to report that its first ADRs were traded on the OTC Market last week as a member of the Nasdaq International Designation, after completion of the customary regulatory review process.  Mr. Phillips commented, “We are very pleased that our ADRs commenced trading last week and hope to develop substantial liquidity on the Nasdaq OTC prior to our full US listing early in 2018.  With a US asset and a US-based management team, we expect to develop a very strong following in the US capital markets as a complement to our strong base with the ASX.”

Piedmont Lithium Ltd holds a 100% interest in the Piedmont Lithium Project (“Project“) which is located within the world-class Carolina Tin-Spodumene Belt (“TSB“), and along trend to the Hallman Beam and Kings Mountain mines, historically providing most of the western world’s lithium between 1950 and 1990. The TSB is one of the premier localities in the world to be exploring for lithium pegmatites given its history of lithium bearing spodumene mining, favourable geology and ideal location with easy access to infrastructure, power, R&D centres for lithium and battery storage, major high-tech population centres and downstream lithium processing facilities.

The TSB has previously been described as one of the largest lithium provinces in the world and is located approximately 40 kilometers west of Charlotte, North Carolina, United States. The TSB was the most important lithium producing region in the western world prior to the establishment of the brine operations in Chile in the late 1990’s. The TSB extends over approximately 60 kilometers in length and reaches a maximum width of approximately 1.6 kilometers.

The Project was originally explored by Lithium Corporation of America which eventually was acquired by FMC Corporation (“FMC“). FMC and Albemarle Corporation (“Albemarle“) both historically mined the lithium bearing spodumene pegmatites from the TSB with the historic Kings Mountain lithium mine being described as one of the richest spodumene deposits in the world by Albemarle. These two mines and their respective metallurgy also formed the basis for the design of the two lithium processing facilities in the region which were the first modern spodumene processing facilities in the western world.