Keith D. Phillips, President and Chief Executive Officer, said, “These additional drill results are outstanding and confirm our belief in the Piedmont Lithium Project.  Our team has discovered a world-class mineral system with over 30 pegmatite bodies over a combined 4+ kilometers of strike length, virtually all within 100 meters of surface.  We look forward to receiving the remaining Phase 2 assay results over the coming weeks.”

In addition to the first 51 Phase 2 drill holes (reported September 26, 2017 and November 2, 2017), the current group of 26 drill holes reported in this release continue to define high grade mineralised trends totalling over 4 kilometers in strike.  The entire Pegmatite system remains open at depth and along strike.  Drill hole details and weighted-composite assay intercepts are attached as Table 1.

Geological modelling has begun on the results from the Phase 2 drill campaign with initial results indicating the presence of 38 pegmatite bodies across the 4+ kilometres of strike length on the Project. Importantly, the vast majority of the dykes have been intersected at shallow depths of less than 100 metres vertically. These initial results give the Company confidence in being able to define a shallow, open-pitable deposit which is strategically located within the historical lithium mining and processing region of the USA.

Logging, sampling and shipping of all Phase 2 drill core samples has been completed.  All assays from the Phase 2 program should be received from SGS Labs by early-December. 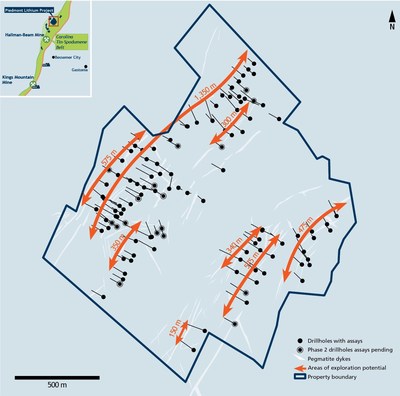 Significant intercepts from the Star Corridor include: 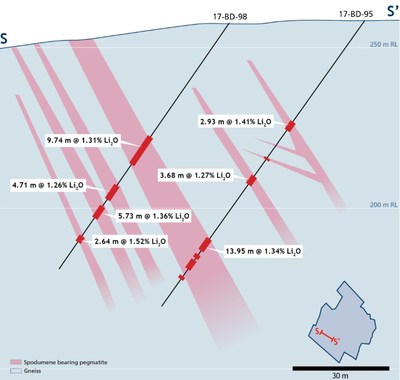 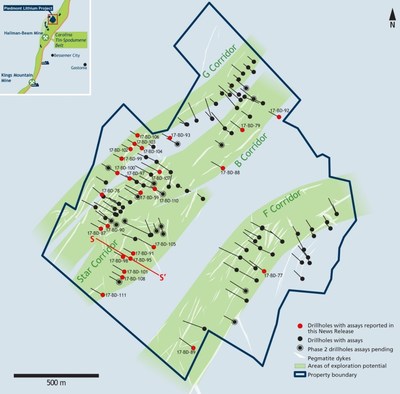 Piedmont Lithium Limited (ASX: PLL; OTC-Nasdaq: PLLLY) holds a 100% interest in the Piedmont Lithium Project (“Project”) located within the world-class Carolina Tin-Spodumene Belt (“TSB”) and along trend to the Hallman Beam and Kings Mountain mines, historically providing most of the western world’s lithium between 1950 and 1990. The TSB is one of the premier localities in the world to be exploring for lithium pegmatites given its history of lithium bearing spodumene mining, favorable geology and ideal location with easy access to infrastructure, power, R&D centers for lithium and battery storage, major high-tech population centers and downstream lithium processing facilities.

The TSB has previously been described as one of the largest lithium provinces in the world and is located approximately 40 kilometers west of Charlotte, North Carolina, United States. The TSB was the most important lithium producing region in the western world prior to the establishment of the brine operations in Chile in the late 1990s. The TSB extends over approximately 60 kilometers in length and reaches a maximum width of approximately 1.6 kilometers.

The Project was originally explored by Lithium Corporation of America which eventually was acquired by FMC Corporation (“FMC”). FMC and Albemarle Corporation (“Albemarle“) both historically mined the lithium bearing spodumene pegmatites from the TSB with the historic Kings Mountain lithium mine being described as one of the richest spodumene deposits in the world by Albemarle. These two mines and their respective metallurgy also formed the basis for the design of the two lithium processing facilities in the region which were the first modern spodumene processing facilities in the western world.