NEW YORK, Dec. 12, 2017 /PRNewswire/ — Piedmont Lithium Limited (ASX: PLL, OTC-Nasdaq: PLLLY) (“Piedmont” or “Company”) is pleased to announce that following completion of the recent capital raising and building upon the successful results from previous drilling programs, a new comprehensive 20,000-meter drill program has commenced at the Piedmont Lithium Project (“Project“), located within the world-class Carolina Tin-Spodumene Belt (“TSB“). The new drill program will be focused on completing infill drilling for the definition of a maiden Mineral Resource and also aggressively testing the extensions of the pegmatites identified both along strike and down dip.

In addition, based on the drilling results on the portions of the Project explored to-date and geological modelling of the pegmatites, an initial Exploration Target of between 10 to 15 million tonnes at a grade of between 1.00% and 1.25% Li2O has been estimated by CSA Global. The potential quantity and grade of this Exploration Target is conceptual in nature, there has been insufficient exploration to estimate a Mineral Resource and it is uncertain if further exploration will result in the estimation of a Mineral Resource.

The Company remains highly confident in its ability to develop a world class integrated lithium operation in North Carolina and will continue its land acquisition strategy to capitalize on its “first-mover” initial land position in the Carolina Tin-Spodumene Belt. The location of the Project gives it key competitive strengths over other potential lithium locations worldwide:

Keith D. Phillips, President and Chief Executive Officer, said, “We are extremely pleased with the scale of our initial Exploration Target for the Project, which is based on the portion of our initial core land package that has been drilled to date, and leaves considerable upside as we broaden our drill horizons and continue to expand our land package. Our next drilling program will position us to announce a maiden Mineral Resource in early to mid-2018, which will serve as the basis of a Scoping Study on the Project shortly thereafter.

“Given the numerous advantages inherent in our location in North Carolina, including outstanding infrastructure, a strong local work force, and proximity to important lithium processing facilities and other downstream customers, this initial Exploration Target is more than sufficient to support the potential re-establishment of a strategic high value battery materials operation.” 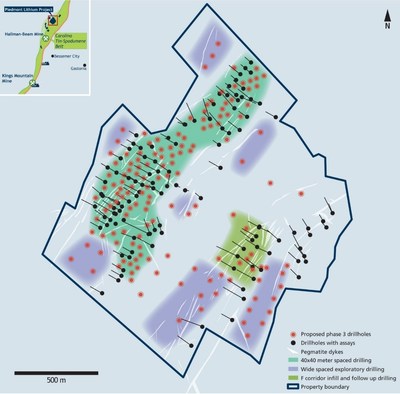 Piedmont Lithium Limited (ASX: PLL; OTC-Nasdaq: PLLLY) holds a 100% interest in the Piedmont Lithium Project (“Project”) located within the world-class Carolina Tin-Spodumene Belt (“TSB”) and along trend to the Hallman Beam and Kings Mountain mines, historically providing most of the western world’s lithium between 1950 and 1990. The TSB has been described as one of the largest lithium provinces in the world and is located 40 kilometers west of Charlotte, North Carolina.  It is a premier location to be developing an integrated lithium business based on its favorable geology, proven metallurgy and easy access to infrastructure, power, R&D centers for lithium and battery storage, major high-tech population centers and downstream lithium processing facilities.